Imagine a terrorist group infiltrated your country. For my hypothetical, I am going to use the U.S. since that is where I live, but this thought experiment could apply anywhere. Imagine it is known by everyone – you, your friends and family, your government – that this terrorist group exists, but nobody knows who is in it. This terrorist group is very secretive and good at keeping theirs and everyone else’s identities a secret.

Now imagine this terrorist group starts carrying out attacks. Nothing so destructive as blowing up buildings and opening fire with automatic weapons in large, crowded places. No, this terrorist group is much more secretive. Instead, they do things like poisoning food at restaurants or water at theaters and large sporting events – places where large numbers of people gather. But, it’s only enough poison that maybe 1 in 20 people die, the others simply becoming violently ill and clogging up hospitals.

Over the course of 4 months this terrorist group sends over 2 million people to the hospital and kills 120,000. That’s over twice as many as all Americans died during the Vietnam War – this is one dangerous terrorist group.

What do you suppose our reaction to this would be? Would people deny that anything is happening? Would people still prefer to go to restaurants, theaters, sporting events, and other everyday activities?

I think anyone who hasn’t been living under a rock will know that my thought experiment here is a transparent analogy for the COVID-19 epidemic. But there is one glaring difference: in my hypothetical, there are people – actual human beings – responsible for the mayhem. And we all know full well that if there were people behind what COVID-19 has done, the fear and panic would likely rip a country apart much faster than COVID-19 has done.

As an example, look at the protests about police brutality. As any regular readers of this blog know (as if there could be regular readers when I’m not even that great of a regular writer) I have libertarian sympathies and am no fan of the police. But neither am I so ideological as to pretend that racism does not exist – it definitely does. But the number of deaths caused by police in all of 2019 was 1,098 people: 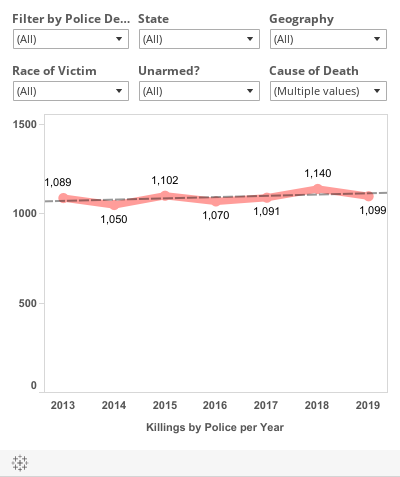 That is 0.9% of the number of people who died in 4 months of COVID-19. But police brutality has human faces – sentient beings at whom we can point fingers, lay blame, and feel comforted about exacting justice upon. This, to me, is a symptom of the human tendency to anthropomorphize problems. Or, perhaps, the inverse: to disregard problems that cannot be anthropomorphized. Things like disease, natural disasters, automobile accidents, and so on. If we can’t put a human face on it, or attribute human agency, then it is not a problem. If it is a person, or group of people, then it is immediately thought to be coming for me.

Historians would likely say that we are still living in a post 9/11 world. Obviously that will always be technically true, but the reason to name it such is to point out that we’re still living in the shadow of that momentous day all the way back in 2001 – now nineteen years ago. Many soldiers in Afghanistan right now, as a direct result of those attacks, were not even born yet when the towers were hit. There were humans behind that attack, meaning it immediately gained and still retains an overwhelming significance in our minds. Terrorists are humans and they could be after me.

But SARS-CoV is a virus. It has no face or human agency. Things like that only happen to other people, not me or the people I know. It’s random and therefore unfathomable. Just like with the Spanish Flu, as soon as it passed, people just sort of forgot about it, even though it killed many more people than the First World War (and the Second World War, for that matter), which remained etched in people’s consciousness for much longer. The Great War was an act of humans; the Spanish Flu was too intangible.

I find it interesting, too, that people did go (and are going) to great lengths to attempt to anthropomorphize COVID-19. All the rumors of it escaping a biological weapons laboratory from China (as was and likely still is believed in some corners) to the Plandemic video to Iran where they believed COVID-19 was unleashed by the U.S. And even Asian people experienced a significant uptick in racism surrounding COVID-19 because people wanted to place blame on them for bringing the virus here (disregarding the fact that the Asian people being blamed were often not born in Asia or had even recently visited Asia, or the fact that Asian countries like South Korea, Taiwan, Japan, and Vietnam did a much better job at stemming the spread of the virus than did places like the U.S.). It makes it easier for us if we can believe there are humans with human intentions behind things.

It’s a function of our Hyperactive Agency Detection Device, which is widely believed to be why humans are receptive to spiritual and religious beliefs: we want to see some conscious agency behind everything because that is what we evolved to do. A false positive about the rustling bushes – thinking it’s a lion when it’s just the wind – does not cause much harm, but a false negative – thinking it’s the wind when it’s a lion – does, and so we evolved to think a being with agency (the lion) is the cause of our experiential phenomena when we do not know its cause.

Because we humans evolved in a world where agency was extremely salient – whether from predators hunting us, the prey we were hunting, or the social environment of our fellow humans – it is agency that we are able to most easily grasp. Indeed, our shorthand for understanding the world is often an attribution of agency – electrons and protons want to come together because they are attracted to one another; evolution designed our bodies to walk upright; the plants are trying to grow; the wind is working against us; and so on. Thus, when we can’t attribute agency, such as to a virus, we humans have a tendency to underestimate the dangers.

All of this only lends credence to the idea in my mind that human societies are doomed to fail. We’re quick to blame each other – whether rightfully so or not – but just as quick to dismiss or forget about issues that are intangible or not able to be anthropomorphized.

Featured Image: refrigerated semi trailers where the corpses of people killed by COVID-19 were stored