Aristotle defined metaphysics as the study of Being qua Being – or, one might say, studying Being being Being. He says in book VII of his Metaphysics that Being is the individual instances of essence, which is the substance that defines what a thing is in-itself. Now, in our present time, we’ve narrowed down the primary substance further than our everyday sensible objects, down to subatomic particles. Can Aristotle’s philosophy be a useful lens to think about quantum mechanics?

Book VII of Aristotle’s Metaphysics spends a good deal of time attempting to define what substance and essence are. The punchline is that he describes substance as that to which other things are predicated and which is not a predicate of anything else; essence is what makes a thing what it is (roundness is one and the same with the essence of roundness and a round object contains the essence of roundness).

To expand on the definition for substance: a predicate is something that can be said of a subject. In the statement “the woman is running” has the woman as a subject and running as a predicate. But the woman is not substance, because “woman” is a predicate of the individual in question. Substance would be a sort of substratum to which other properties can be predicated – that which is “the woman.”

Of course, this is using objects available to Aristotle. To him, something like an individual person would appear to be fundamental. That’s why he had to spend a chapter in book VII explaining why universals can’t be substances – because “two-legged animal” applies to all humans and it doesn’t make any sense (according to Aristotle) for a substance to be anything other than particular, otherwise all people would be the same person because they would all contain to single essence “two-legged animal.”

For us, though, we can describe humans – and everything else – as being made of fundamental particles, namely leptons, quarks, and bosons. Even more fundamental, however, might be to say that everything is made of quantum fields.

The question is, then, is there a ‘substance’ that makes up quantum fields? A fundamental substratum to which predicates such as charge, mass, spin, momentum, energy, etc could be applied? Or does it even make sense to separate the field from these predicates? Is there electron qua electron? Up quark qua up quark? Photon qua photon? 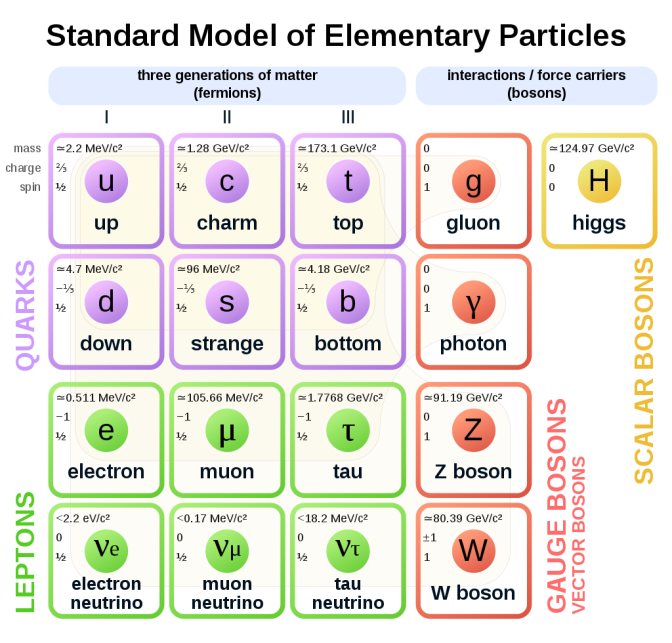 If substance as Aristotle conceived is inapplicable to quantum fields, then are they simply made up of these collections of properties? What ties them together – in other words, why is it that the mass 9.1×10-31 kilograms (0.511 MeV/c2), the charge 1.6×10-19 coulombs, the spin 1/2 etc all describe the same particular object? Is it arbitrary, or is there some essence – some fundamental thisness – that dictates an electron have this set of unique properties?

Featured image: equation for Field Lagrangian of the Standard Model of Particle Physics.